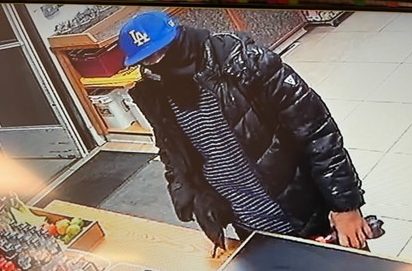 Police are searching for a man who robbed the Laurel Lane Liquor in San Luis Obispo on Monday evening.

Shortly after 8 p.m., the suspect entered the liquor store at 1291 Laurel Lane. After making a purchase, the suspect showed a gun in his waistband to the clerk and demanded cash, according to police.

The suspect fled from the liquor store with an undisclosed amount of cash. Officers arrived and searched the area but were unable to find him.

Police describe the suspect as a Hispanic man who is 6 feet tall with a large build. The robber was wearing a blue LA Dodgers hat, a black gaiter face mask, a black puffy jacket, a black and white striped shirt, black pants and blue shoes.