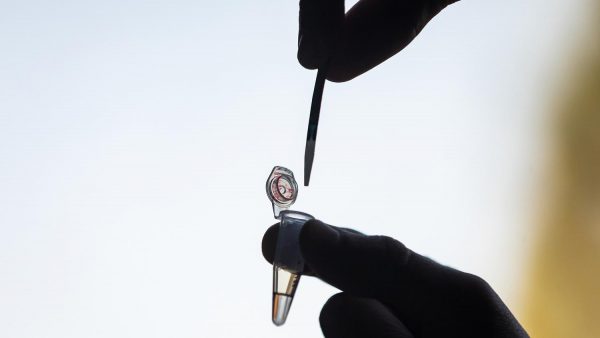 In January, Cal Poly officials disclosed that 41 students received false positive coronavirus tests, after which 13 of those students became exposed to the virus during mandatory isolation. Following the false positive tests, Cal Poly stopped working with contractor Avellino Labs and transitioned to its own in-house testing procedure.

Faculty members developed a strip that enables saliva sample collection from the mouth, which is less invasive than a nasal swab. Cal Poly began using the device for on-campus tests in February. The device has enabled Cal Poly to double the number of tests it conducts daily while reducing the workload involved in carrying out the tests, the university says.

“When placed in one’s mouth, the device automatically absorbs the exact amount of saliva required for the test and excludes potential contaminants like mucus,” said Nathaniel Martinez, an associate professor of biological sciences and lead researcher on the team that created the device. “Thanks to the improved quality of samples and consistency of sample size, the tests can be run more efficiently.”

Cal Poly has partnered with Santa Maria-based medical device manufacturer Hardy Diagnostics to bring to market saliva-based COVID-19 testing technology. Faculty and staff involved in the project hope the technology can be used to address future viruses, in addition to the COVID-19 pandemic.

“The device was developed and refined for the SARS-CoV-2 virus, but our team quickly realized it could function as a platform saliva collection device for testing a panel of other viruses in the future,” said Jim Dunning, Cal Poly’s associate Vice President of Corporate Engagement and Innovation. “We found a fantastic local partner in Hardy Diagnostics to scale this technology for the greatest public good.”

Cal Poly’s Technology Transfer and Corporate Engagement and Innovation offices, in conjunction with the faculty members involved, filed for patent protection. Also, with assistance from Cal Poly’s Center for Innovation and Entrepreneurship, they identified commercialization partners to further develop and scale the new device.

Under a license agreement with Cal Poly, Hardy Diagnostics will further develop the device for commercialization and bring it to market.

“We are very excited about the partnership and the potential future use of this device,” Hardy Diagnostics President Jay Hardy said. “We believe that saliva testing for COVID will eventually be the dominant and preferred method, due to enhanced patient comfort and compliance.”