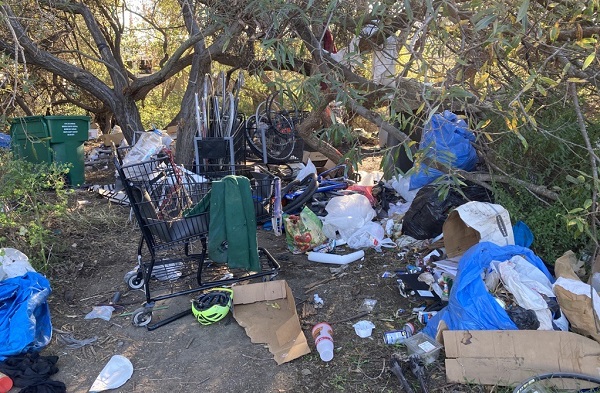 Trash and debris from a homeless encampment covered public land and open space near San Luis Creek on Dec. 1. Photo from SLO City

The city of San Luis Obispo filed a motion in federal court last week seeking to dismiss a lawsuit over homeless individuals being allowed to sleep in tents and vehicles.

In September, a group of homeless individuals sued the city in federal court, asking that they be granted the right to sleep in tents and vehicles in public places without facing destruction of their property, harassment, fines and criminal charges. The San Luis Obispo City Council has passed multiple ordinances barring overnight access to parks and public spaces.

Even though San Luis Obispo has a policy of not destroying personal property seized during raids of homeless encampments for at least 60 days, the lawsuit alleges the city has repeatedly discarded items such as tents, cooking utensils and sleeping bags. The suit accuses the city of violating the Eighth Amendment by punishing people for being homeless and the Fourth Amendment for seizing and destroying personal property, as well as the California Constitution’s prohibition against cruel and unusual punishment.

On Dec. 8, the city filed a motion to dismiss the case. The city denies it criminalizes homelessness while alleging the lawsuit aims to prevent officials from enforcing SLO’s health, safety and environmental protection ordinances for public spaces, according to a city press release.

“Being homeless is not a crime in San Luis Obispo. We share the concerns about the growing homelessness crisis in California, but we believe that we all need to work together to solve the problem,”  said City Attorney Christine Dietrick in the release.

“Instead of criminalizing homelessness, our city has spent millions of dollars and untold time and energy on innovative solutions to address the problem within our city limits,” Dietrick said. “We will continue to defend our community’s right to enforce our own conduct-related laws for the health, safety and welfare of our entire community. While some may disagree with our policy choices, case law supports the legality of the city’s ordinances, and the facts reveal that we enforce them with a balance of compassion for people and accountability for harmful conduct.”