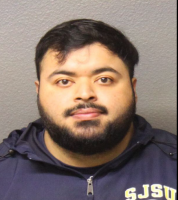 In early December, detectives obtained information that Francisco Jonathan Colima, 29, had been contacting minors over the internet for the purpose of obtaining child pornography, police said. Then on Thursday, detectives from the Santa Maria Police Department’s Special Victims Unit served a search warrant and took Colima into custody without incident.

Detectives say there may be additional victims in the case. Officers are asking anyone who has information about the case to contact Detective Matt Silver at (805) 928-3781 ext. 1346.