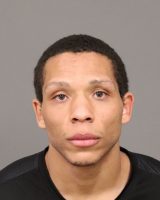 A man is facing more than 40 years in prison after a San Luis Obispo jury convicted him of sex crimes, including assault with intent to commit rape, for breaking into homes in Nipomo early this year and grabbing women.

Shortly before 11 p.m. on Jan. 10,  Nipomo man Kammeron Isaac Anderson, 26, entered a home where a couple was sleeping. The couple awakened to find Anderson in their bedroom wearing only underwear. When the couple confronted Anderson, he grabbed his clothing from beneath their bed and fled, according to the SLO County District Attorney’s Office.

Then on Jan. 22, shortly before 3:30 a.m., Anderson forced his way into a home and physically restrained a female resident. The woman’s screams alerted her husband who intervened. Anderson then fled.

About two hours later, Anderson entered a residence located about one mile away, removed his shoes and entered a woman’s bedroom. Anderson pushed the woman on the bed and attempted to restrain her. The woman yelled for her adult daughter, who was inside the home at the time. The daughter came and confronted Anderson, who then fled.

Anderson’s sentencing hearing is scheduled for Jan. 12, 2022. He faces a maximum sentence of 16 years, plus 28 years to life, according to the district attorney’s office.

“We thank the jury for their concentrated focus in this shocking and emotional case,” District Attorney Dan Dow said in a statement. “The survivors demonstrated remarkable courage in their response to the assaults and in their willingness to testify so that this predator could be held accountable. This conviction should encourage other survivors of sexual assault to report the conduct to law enforcement.”