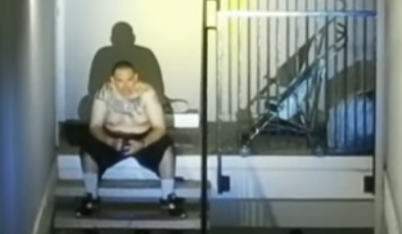 Steven Adam Calderon sitting outside the apartment, with the gun next to the stroller, shortly before he was shot and killed.

Paso Robles police released body cam video on Wednesday of a fatal officer-involved shooting at an apartment complex on July 6.

Multiple members of the of the San Luis Obispo Regional Special Weapons and Tactics Team shot and killed Steven Adam Calderon, 32, following a more than eight hour-long standoff, which included several exchanges of gunfire. A SLO County District Attorney Office investigation recently ended, though the report has not yet been released.

Calderon, a Los Angeles gang member, arrived a day earlier to visit his son and “his baby mama,” who lived in an apartment at the Dry Creek complex near the 2400 block of Branch Creek Circle.

Shortly before 4 p.m. on July 5, the woman’s uncle reported Calderon had fired gunshots from the balcony of his niece’s apartment after he put the gun to her head and threatened to kill her. The victim and her son were able to get out of the apartment before officers arrived.

Calderon barricaded himself in the apartment. At about 5:30 p.m., after Calderon pointed a firearm at officers, then Police Chief Ty Lewis asked for assistance from the San Luis Obispo County Regional SWAT Team.

During the standoff, Calderon would come in and out of the home and yell at law enforcement personnel. Officers repeatedly shouted to Calderon, “Adam, come to the door. Adam, you need to come out with your empty hands raised. You need to come out and surrender.”

Instead of engaging in any kind of dialogue, Calderon emerged from the home several different times and fired shots from a handgun at police officers and the SWAT team. Some of the shots hit a Bearcat, an armored vehicle that SWAT officers brought to the scene.

Officers deployed tear gas and different chemical agents inside the home to try to get Calderon out, which did not work. A drone then videotaped Calderon writing what appeared to be gang symbols and “RIP” in black marker on the refrigerator.

At about 1:15 a.m. on July 6, Calderon emerged from the home, dropped his gun on the porch, took off his shirt and put his hands on his head.

A few minutes later, Calderon sat down prompting officers to tell him to standup, put his hands on his head and not to reach for anything. Calderon ignored the commands and moved his hand towards the gun.

Multiple officers shot rounds at Calderon, who died at the scene.

Watch video of the incident here.