A bull fell down a 90-foot cliff near Cayucos, then soared high above it upon being airlifted by rescue personnel earlier this week.

On Sunday, Molnar Cattle LLC determined one of its bulls was missing. Following a long search, Molnar Cattle located the bull the following day on a beach below a 90-foot cliff.

Members of the Molnar family descended the cliff early Tuesday morning in an attempt to rescue the bull. They determined they would need help from a helicopter rescue team.

After the bull had been sedated and tied up, a CHP helicopter airlifted it off the beach. The helicopter transported the bull to a Molnar Cattle corral.

“Big thank you to the CHP and Cal Fire for helping us keep this guy alive and well!” Molnar Cattle stated in an Instagram post. “This sure doesn’t happen every day… we hope.” 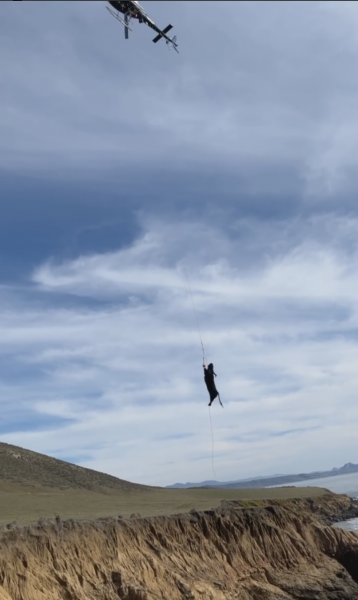