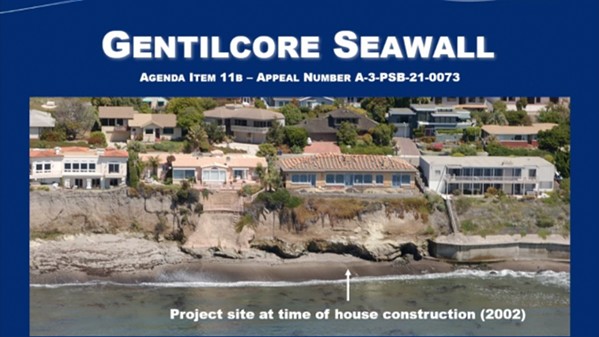 Existing plans call for building seawalls for a pair of Pismo Beach homes that are situated atop erosion-prone bluffs. Both seawalls would cover entire beach bluffs.

Commission staff found substantial issues with the seawalls, including that they do not conform to local coastal program (LCP) requirements. The LCP only allows shoreline reinforcement to protect structures that have existed since 1977. The Gentilcore and Hyman-Okerblom homes were completed in 2003 and 2013 respectively.

At a Dec. 17 meeting, Dan Carl, the Coastal Commission’s Central Coast director, said Gentilcore built a house in a known hazardous area, based on a 100-year evaluation of the site. Now, 20 years later, Gentilcore is telling a different story following an estimated 10 feet of erosion having occurred during that time span, Carl said.

“The project raises issues of regional and statewide significance, given that climate change and sea level rise-related effects (such as coastal erosion) impact the entire coastline, and the issue of how to address them has become a top regulatory and policy priority for the state of California,” according to a commission staff report.