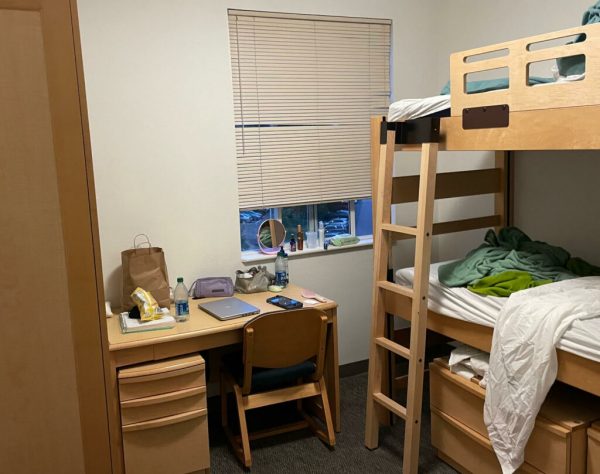 During the past seven days, 1,022 students tested positive for the virus. Of those, 436 live on campus, according to Cal Poly. After filling the 62 on campus isolation beds, school administrators began housing COVID-positive students in hotels or offering students $400 gift cards if they agree to move home for isolation.

Students packed in the on-campus isolation apartments have voiced concerns about what they call deplorable living conditions.

Ellie Abundo, a freshman currently isolating in the Cerro Vista apartments, has lodged complaints with university administration regarding the cramped conditions.

“During studying, we are forced to switch off between the floor and the one desk that we are supplied,” Abundo said. “Every time we have to move to another part of the room, we have to maneuver around each other. There is no such thing as isolating in these isolation apartments.”

Each 1,000 square feet apartment includes a kitchen, two bathrooms and four 100 square feet bedrooms. Students are not allowed to leave the apartment for any reason, even to walk outside for some fresh air, sophomore Katherine So said.

“The worst part for me is how we can’t even go outside, not even on little walks where we could still wear masks and social distance,” So said.

Abundo is also frustrated with the food delivered and the cost. Cal Poly provides forms for students to check which meals they would like to receive — breakfast, lunch and dinner — but the forms do not include meal or dietary options.

“Many of our meal plans can’t afford to spend $300 in 10 days, and we will have to tighten our budget in the future because of it,” Abundo said. “My roommate had to call and specifically ask for a dietary restriction.”

Isolated students also need to find a friend to bring plates and cutlery, which the campus is not providing, So said.

Abundo is concerned that Cal Poly staff has failed to address the concerns of students forced into isolation apartments.

“No one is listening,” Abundo said. “Mentally right now I am so much worse than I am physically.”