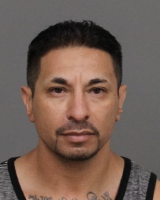 A judge sentenced an Arroyo Grande man who sexually assaulted three San Luis Obispo women at knifepoint to 50 years to life in prison.

On July 8, 2018, Arthur Tiofilo Rocha broke into a San Luis Obispo apartment in the middle of the night, held a knife up to a woman’s throat and then raped and orally copulated her. Five days later, Rocha broke into a different San Luis Obispo apartment at night, held a knife to the throat of two women while they were in bed and attempted to rape them.

During the second attack, the two women awoke to Rocha in the bed. Rocha was on top of one of the women and was choking her while holding a knife to her throat.

“Shut the fuck up or I’ll kill you both,” Rocha said during the attack.

Somehow, the women managed to fight off Rocha, break free and flee to a neighbor’s apartment.

Officers found DNA on a knife and glove left behind after the crimes that matched that of Rocha.

In Aug. 2021, Rocha pleaded no contest to four felony counts, including forcible rape and assault with a deadly weapon, for his attacks against the three women. Rocha agreed to the plea deal just days before his trial was set to begin.

“These young women survivors are courageous and are to be commended for their enduring strength throughout the lengthy court process,” Dow said in the statement. “This strong sentence sends a clear message that sexual predators will be held accountable to the maximum extent of the law in San Luis Obispo County.”