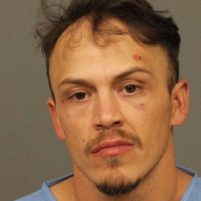 A judge sentenced a rural Paso Robles man to life in prison without the possibility of parole for killing his girlfriend and the couple’s unborn baby.

On March 3, 2019, Daniel Raul Rodriguez Johnson crashed his car on York Mountain Road in Templeton. While officers spoke with an ambulance driver, Johnson commandeered a CHP patrol vehicle and fled. Johnson left his and Carrington Jane Broussard’s 2-year-old and 4-year-old children at the crash site.

A pursuit ensued, and officers chased Johnson in the stolen CHP vehicle from Highway 46 near Templeton to an area north of San Simeon on Highway 1. Officers caught Johnson and arrested him. As part of the investigation, sheriff’s deputies went to the couple’s home and found Broussard’s body.

Broussard, 27, had been stabbed multiple times, killing her and her unborn child. Broussard was nine months pregnant, and she was scheduled for a caesarean delivery the following day.

In Sept. 2021, Johnson pleaded guilty to the first-degree murder of his girlfriend and the second-degree murder of their unborn baby. Johnson also admitted to the special circumstance allegation of committing multiple murders.

As a result of his plea, Johnson, now 34, was sentenced to life in prison without the possibility of parole. Prosecutors opted to seek life in prison without parole, rather than the death penalty, after consulting the surviving relatives of the victims, as well as Johnson’s attorney and law enforcement agencies involved in the case.

“We are satisfied that the defendant has now taken personal responsibility for his unimaginably horrific crimes,” District Attorney Dan Dow said in a statement following Johnson’s sentencing. “Life in prison without the possibility of parole is an appropriate sentence given that he took two innocent lives and assures he will not pose a danger to our community in the future. Our prayers are with the family and friends of Carrington and her unborn baby.”