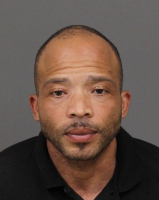 The court sentenced an Atascadero man to 11 years in state prison and ordered him to register as a sex offender, for a pair of incidents in which he assaulted women in San Luis Obispo County.

Tryone Anderson, 41, stood trial once for an Atascadero incident that occurred in May 2018 and twice for a San Luis Obispo assault that took place in Dec. 2017. Though no jury convicted Anderson of charges related to the San Luis Obispo incident, he ultimately pleaded no contest to several counts stemming from the assault in SLO.

On the night of Dec. 4, 2017, a Cal Poly student was home alone in her apartment on Foothill Boulevard, she testified. While dressing in her room after taking a shower, she heard a stun gun in the living room, which startled her.

She ran out naked, thinking there was an electrical fire, and was then confronted by a man wearing an oversized leather jacket and black gloves, who was standing in the dark. The victim said the man put his hand over her mouth and held her from behind while he tied her wrists and ankles with duct tape. He then rubbed lubrication on her body and tried to sexually assault her on her bed, she said.

The woman pleaded with the man and told him she was a virgin. Suddenly, she heard the man exiting through the front of the apartment, she said.

Prosecutors said Anderson’s DNA was found on the edge of a piece of duct tape, possibly from tearing it with his mouth.

Five months later, a different woman was driving after dropping her children off at school in Atascadero. Anderson hit her vehicle from behind in what was believed to have been an intentional collision.

Anderson pulled the woman into the back seat of his car and physically assaulted her, according to the SLO County District Attorney’s Office.

Bystander Michael Rummel then attempted to intervene. Anderson pulled out a knife, and an altercation ensued in which Rummel suffered an injury to his hand.

Anderson fled the scene by foot, but was quickly located by Atascadero police officers and arrested. A DNA sample taken during Anderson’s booking later matched DNA from the Dec. 2017 crime scene in SLO, prosecutors said.

In March 2020, Anderson stood trial for charges stemming from both of the incidents. At the conclusion of the trial, the jury convicted Anderson of charges he faced for the Atascadero incident, including attempted kidnapping, assault with a deadly weapon and assault with force likely to cause great bodily injury. But, the jury failed to reach a unanimous verdict on the two charges Anderson faced in connection with the SLO incident.

Then in December, Anderson agreed to a plea deal with prosecutors. Anderson pleaded no contest to residential burglary, assault with force likely to cause great bodily injury, false imprisonment and misdemeanor sexual battery — all for the San Luis Obispo incident.

On Tuesday, District Attorney Dan Dow announced Anderson received the maximum allowable sentence for his convictions. In addition to receiving 11 years in prison, Anderson was ordered to register as a sex offender upon release. His sex offender status will last 10 years.

“It is because of the victim survivors’ willingness to come forward and participate that we were able to bring this predator to justice,” Dow said in a statement. “We commend the neighbors and passerby in Atascadero who witnessed the crimes and came forward to help. Even when it requires multiple jury trials, our team will continue to pursue justice and accountability for dangerous criminals.”