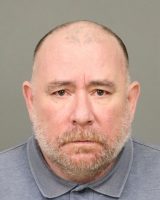 A judge on Tuesday sentenced an Irish national who worked as a special education assistant for the Templeton Unified School District to more than a dozen years in prison for sexually abusing children.

Timothy Patrick Prendeville, an Atascadero resident, worked as a teaching assistant and special education assistant for the Templeton district spanning at least 2013 through 2018, according to Transparent California. The North County school district was still paying Prendeville in 2019.

Prendeville sexually abused three children, two of whom he knew well. The third child Prendeville abused had been invited into the man’s home as a guest of the family, according to the SLO County District Attorney’s Office.

Prendevillec sexually abused children in Atascadero from Dec. 2011 through Oct. 2019.

Following Prendeville’s sentencing hearing, District Attorney Dan Dow released a statement calling for the Irish citizen to be deported from the United States after serving his prison sentence.

“Our hearts break for the survivors because of the abuse they had to endure. Any person who preys on vulnerable children must face strong consequences,” Dow said. “Mr. Prendeville betrayed numerous children who were close to him and now stands convicted of three strikes under California’s Three Strikes Law. After serving his prison term, pursuant to current federal law, he should be deported out of the United States.”