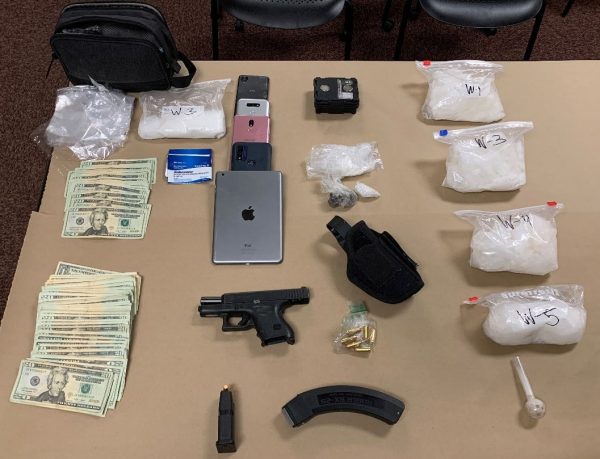 Paso Robles police officers arrested a man found on Tuesday with thousands of dollars worth of drugs, as well as a loaded handgun and large-capacity magazine.

Shortly before noon, a 911 caller reported a suspicious vehicle parked in a parking lot in the 2400 block of Riverside Avenue. The caller said the vehicle had been running for about 45 minutes, but there did not appear to be anyone in or around the car, according to the Paso Robles Police Department.

Officers arrived in the area and found Paso Robles resident Dustin Marlow, 36, in the driver’s seat of the vehicle. Police determined Marlow was under the influence of a controlled substance, and arrested him.

An investigation ensued, and officers found Marlow was in possession of a loaded Glock .40 caliber handgun with the serial numbers removed, a 25-round magazine, four pounds of methamphetamine, 25 grams of Fentanyl, 19 grams of black tar heroin, 27 Suboxone strips and $1,900 in cash. The estimated street value of the drugs officers seized is $13,000, according to the police department.

Officers booked Marlow in the San Luis Obispo County Jail on nine felony charges and three misdemeanor charges relating to possession of narcotics and weapons violations. Marlow currently remains in custody with his bail set at $50,000, according to the county sheriff’s office website.