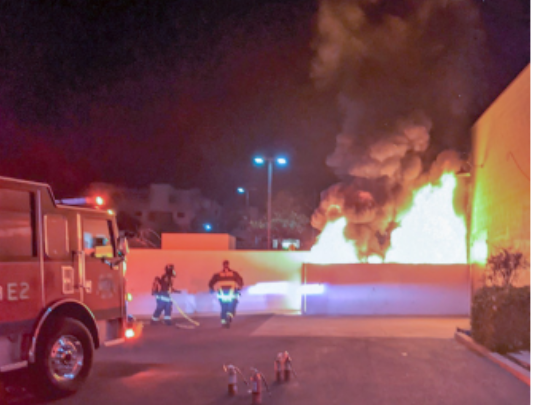 Police arrested a man on Saturday for allegedly setting fire to a pet shop located at 1675 W. Grand Avenue in Grover Beach.

Shortly before 11 p.m., Grover Beach police officers and Five Cities Fire Authority personnel responded to a call of a fire burning the rear exterior portion of the commercial building. A wood pallet containing paint containers was also on fire.

Firefighters were able to extinguish the fire before it could damage the interior of the business.

Officers discovered a witness to the arson. A short distance away from the fire,
an officer found a suspect matching the witness’ description who was in possession of  a torch lighter and who had remnants of paint on his skin and clothes.

Officers then arrested Raymond Isiah Reyes, 23, of Grover Beach and booked him in the San Luis Obispo County Jail on an arson charge. He remains in jail in lieu of $250,000 bail.

Saturday’s fire was the third fire in the area during the past three weeks.

Shortly before midnight on Jan. 20, an unidentified person started an arson fire at Sycamore Mineral Springs Resort & Spa in Avila Beach. A video camera captured a car driving onto the resort with the headlights turned off, a person in the car throwing an item at the area of a pool deck shed and flames shooting up. The driver pulled away, and then turned their headlights back on as they drove off the property.

Shortly after 4 p.m. on Feb. 1, a caller reported a fire burning at a construction site on the 1200 block of Costa Brava near Pismo Beach City Hall. Part of a house that was under construction collapsed as a result of the fire. The homes on both sides of the incomplete house sustained minor damage. The fire is under investigation.