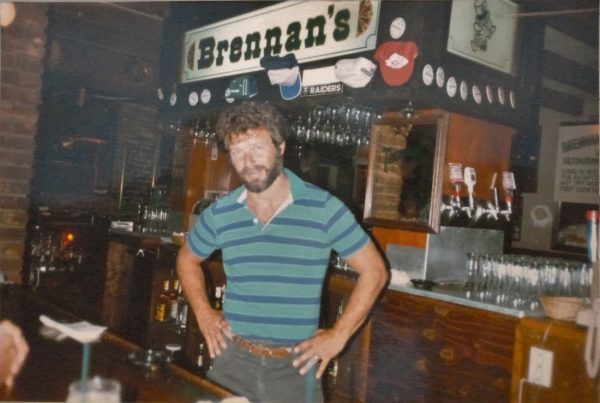 Editor’s Note: The following series of tales from behind the bar, “Happy Jacks Saloon: The Last Morro Bay Fisherman’s Dive,” to be posted bi-weekly includes the notes, thoughts, and opinions of an original American voice: author Dell Franklin.

I’m standing on the sidewalk of the main drag outside the front door of Happy Jack’s, where I tend bar at night, sucking in some fresh Morro Bay marine air and observing activity in the bar across the street, Legends, which is my competition. Both bars are busy. Everybody in Happy Jack’s is smoking and my eyes burn and my lungs feel heavy as four teenage kids shamble toward me on the sidewalk, hoodies dwarfing their heads like cowls, the three boys with pants sagging past their belt lines and crumpling up on their black boots. The girl is in tight black jeans and an army field jacket like I wore as a lowly PFC in the army in the 1960s. She also has a ring in her nose. They are all holding cell phones.

The first kid, obviously the leader, says to me, “Hey dude, you got a smoke?”

“How come you don’t smoke?” asks the girl.

“Because it’s unhealthy,” I tell her.

The first kid says, “How about you cadge us some smokes from some of the dudes in the bar, man?”

They all peer in at the boozers milling around and on the line of stools as the smoke pall billows out the door like a musty, toxic cloud.

From time to time teenagers will try and sneak in the bar when it’s really, really packed and play video games at the back wall, and I’ll shoo them out, and they take their time, exaggerating their already droopy posture and sullen expressions. I don’t know if these are some of the kids attempting this maneuver, because they all dress alike, and hang out at the coffee house a few doors down where a faux Bohemian set lounge around plucking guitars, their dogs hanging out on the sidewalk.

“I’m not going in there and cadge you cigarettes, kid,” I say.

I ignore him. Pretty soon a law will pass that forbids smoking in bars, which means chain-smoking regulars in Happy Jack’s (they all smoke) will be forced to step outside and smoke, so that myself and the 5% who don’t smoke in bars won’t get lung cancer from secondhand smoke.

I’ve been tending bar most of my adult life, and when I get burned out I drive a cab. Anyway, when the new law soon passes state legislature, these kids will have fertile ground to mooch cigarettes, but right now they are out of luck.

“You could do it,” the girl insists, offering a slight, sexy, up-from-under smile, titling her hips in a seductive pose while protruding her ass. “Whyn’t you be a sweetheart, huh, and get us some smokes?”

“Maybe I do, old grouchy man,” says the girl.

“So you can find out what an ogre is. Can you spell it?”

“Who gives a fuck, old dude,” says the first kid. The others are lurking near the front door, peering in.

“It’s only a four letter word,” I tell him and the girl. The other two look over. “Anybody should be able to spell ogre, especially when you’re confronted by an ogre, because when confronted by an ogre, one should know how to deal with him or her, because it’s part of dealing with reality in this world. Ogres exist at every turn, and one never knows when one’s going to pop up and plague you.”

The girl makes a face like she’s just stepped into a pile of warm, soft shit. “Fuck youuuuu,” she says.

“Maybe we’ll find somebody in your bar to give us smokes,” says the first kid, “if you’re gonna be a fuckin’ ogre.”

“You leave my customers alone, kid.”

“We can do what we fuckin’ want, dude,” says the kid, all bravado.

“This is America, we’re free to do what we want, old ogre,” says the first kid, perking up, shoulders straightening.

“Yeh!” challenges the girl, as the other two kids come over to back her up. “What you gonna do if we stand at the door and ask folks in there for smokes, huh? You can’t do shit.”

“I can do plenty,” I inform her. “I can close the door. I can warn my customers I’ll cut them off if they give you cigarettes. That bar is my domain, my realm. I am in total control. Most of the people in there are wild and crazy and been eighty-sixed from the bar across the street, and they know I have the power to cut them off and control them while they are in that bar, when I’m working, and that also means I do not allow mooches to beg and bother them from the periphery of my territory. I am an ogre. Live with it, because there’s absolutely nothing you can do, and if you try, I don’t give a fuck if you are useless minors, you will feel the wrath of an ogre.”

The second kid puts away his phone. “Faggot,” he says.

“Asshole,” says the other kid, phone in hand.

I take a deep breath of fresh air on this cool damp night. For all I know, these kids might be spawn of commercial fishermen, my best customers, but they too know I run a tight ship. Two of the kids move back over to stand at the entrance of the door to peer in at drinkers emanating a noisy din of spirited conversations and occasional guffaws. I walk over, remove the wedge holding the door open and allow the swinging door to swing shut and connect with the other locked door. They all grumble. I suck in air, sighing with pleasure.

The first kid says, “You oughta start smoking, dude, it might improve your shitty personality.”

They shamble off, headed toward the coffee house.