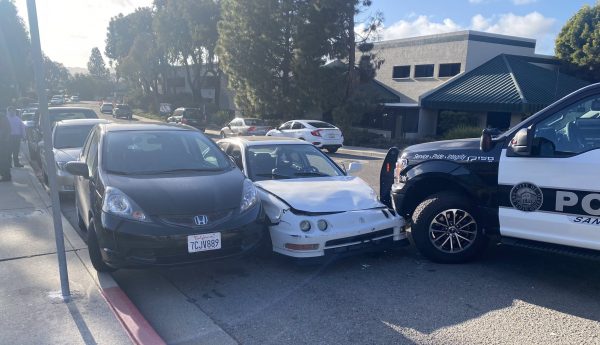 A suspect allegedly driving a stolen vehicle led officers on a chase from Paso Robles to San Luis Obispo Tuesday afternoon, culminating with the suspect crashing into a parked car and a police vehicle.

The pursuit began when Paso Robles police officers were alerted to the stolen vehicle. After heading southbound on Highway 101 and reaching Atascadero, the suspect led CHP officers on Highway 41 to Morro Bay and then on Highway 1 to San Luis Obispo.

In San Luis Obispo, the suspect crashed into a parked car and a police vehicle on Fiero Lane. Following the collision, one SLO police officer was evaluated by paramedics at the scene and released.