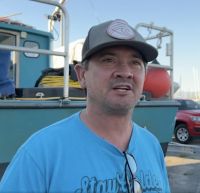 A boater was facing near-certain death last month after falling out of his boat into the Santa Barbara Channel. [KABC]

Scott Thompson was miles away from land and only wearing shorts and a T-shirt. It was nighttime and pitch black.

Thompson tried swimming after his boat as fast as he could, but he could not catch up with it. He began thinking of his family and kept swimming. Then, Thompson felt a splash.

“It was a medium-sized harbor seal,” Thompson said. “The seal would go underwater and he came up and nudge me. Like a dog comes up and nudges your leg.”

After coming across the seal, Thompson felt determined to swim to the nearest oil platform. The platform was far away but closer than land.

Thompson swam for about five hours and made it to the oil platform, freezing and exhausted.

Crews aboard the platform gave Thompson aid. The Coast Guard then transported him to a hospital, where he received treatment for hypothermia and other conditions.