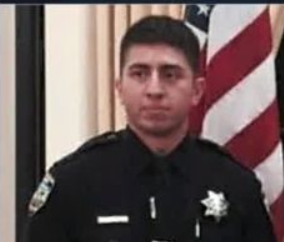 A Salinas police officer was shot and killed during a traffic stop Friday night. This was the first time in nearly 80 years that a Salinas officer lost their life in the line of duty.

Shortly before 11 p.m., Officer Jorge Alvarado Jr. was shot after pulling over a vehicle near the intersection of East Market and Griffin streets. During the traffic stop, neighbors heard a barrage of gun fire.

Officers arrested the suspected shooter and booked him into jail.

Salinas officials are not releasing further information about the shooting at this time.

The 30-year-old officer had been with the Salinas Police Department for five years.