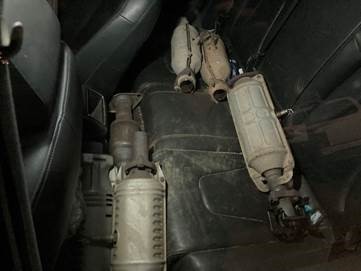 Santa Barbara County Sheriffs deputies arrested one suspect following a catalytic converter theft in Orcutt early Wednesday morning, but a second thief managed to get away.

At about 3:25 a.m., a 911 caller reported hearing tinkering sounds in the 900 block of Diamond Drive and seeing two suspects stealing a catalytic converter, according to the Santa Barbara County Sheriff’s Office. Santa Maria patrol deputies then came out to the area.

Shortly afterwards, deputies noticed a vehicle in the 700 block of Spencer Drive that matched the description of the suspects’ vehicle. Before the deputies could stop the vehicle, the suspects parked and fled by foot.

Deputies established a perimeter around the area. With assistance from the CHP, deputies located one of the suspects on Cherry Avenue.

Upon searching the suspects’ vehicle, deputies found several catalytic converters, as well as a car jack and other tools.

Deputies arrested Merced resident Xiong Vue, 31, and booked him in the Santa Barbara County Main Jail for possession of stolen property and being under the influence of a controlled substance. Vue’s bail was set at $20,000.

Sheriff’s officials thank the 911 caller for quickly realizing a catalytic converter theft was taking place and reporting it.