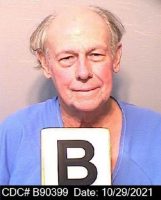 A 70-year-old California Men’s Colony inmate who, close to a half-century ago, kidnapped a bus full of children, buried them in an underground trailer and attempted to hold them for ransom received a recommendation for parole on Friday. [CBS News]

In 1976, Frederick Newhall Woods and two accomplices kidnapped 26 children and their bus driver near Chowchilla. The children were heading home from Dairyland Elementary School.

Seeking $5 million in ransom,Woods and the Schoenfeld brothers tried to place a call to make their demand. But, phones lines were jammed, and they could not get through. After spending about 16 hours underground, the children and the driver managed to dig themselves out and escape.

The crime was dubbed the largest kidnapping in United States history.

Both Schoenfeld brothers have now been granted parole. Prior to a parole panel hearing on Friday, Woods’s attempts to get parole had been rejected 17 times.

Previously, Woods had been disciplined for running an unauthorized gold mine and Christmas tree farm from the California Men’s Colony. But, Woods has not faced any disciplinary action since his last parole hearing in 2019, his attorney said.

During Friday’s hearing, Woods read an apology for the kidnapping.

“I’ve had empathy for the victims, which I didn’t have then,” Woods said. “I’ve had a character change since then.”

“I was 24 years old,” Woods added. “Now I fully understand the terror and trauma I caused. I fully take responsibility for this heinous act.”

The state parole board, comprised of Gov. Gavin Newsom and the board’s legal division, will need to approve the panel’s decision in order for Woods to be released.