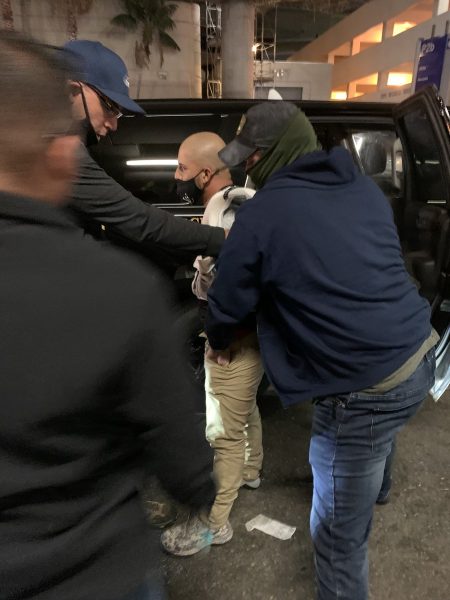 A San Luis Obispo County man, who for years, allegedly sexually molested his stepdaughter and raped her mother, attempted to flee the country on Wednesday, but was tracked down and arrested before boarding a flight to South America at Los Angeles International Airport.

On Monday, the San Luis Obispo County Sheriff’s Office received information that an 11-year-old girl had been molested by her stepfather, Daniel Ramirez-Gutierrez, 36. Detectives began an investigation into the allegations.

The girl told investigators that Ramirez-Gutierrez had been molesting her since she was five years old, according to the sheriff’s office.

On Tuesday, the girl’s mother said she, too, had been victimized by Ramirez-Gutierrez. The mother, 31, told detectives that, for the past three years, Ramirez-Gutierrez had been forcing her to have sexual intercourse and to orally copulate him on a daily basis.

The mother informed the sheriff’s office that Ramirez-Gutierrez had packed up all his belongings and left the home after becoming suspicious that he was being investigated.

On Wednesday, with assistance from the federal Department of Homeland Security Investigations (HSI), detectives learned that Ramirez-Gutierrez was scheduled to depart that day on a one-way flight from LAX to South America. The sheriff’s office and HSI coordinated to locate Ramirez-Gutierrez at the airport.

Sheriff’s detectives and special agents found Ramirez-Gutierrez and arrested him on a multiple-county felony no-bail warrant.

On Thursday, authorities booked Ramirez-Gutierrez in San Luis Obispo County Jail on charges including lewd or lascivious acts with a child under 14 by force, continuous sexual abuse of a child, sexual intercourse or sodomy with a victim under 10 years, rape by force or fear and rape by threat of retaliation.

“I am proud of the great work by our detectives, which took a dangerous and predatory criminal off the streets,” Sheriff Ian Parkinson said in a statement. “I am grateful for the close cooperation we had with the U.S. Department of Homeland Security Investigations to bring this case to a successful conclusion.”

“Homeland Security Investigations works daily with our state and local law enforcement partners to ensure the safety and security of our communities,” Wang said. “This arrest is another example of how the dedicated HSI Los Angeles special agents work with the San Luis Obispo County Sheriff’s Office to prevent a suspected child predator from fleeing the United States to avoid justice.”