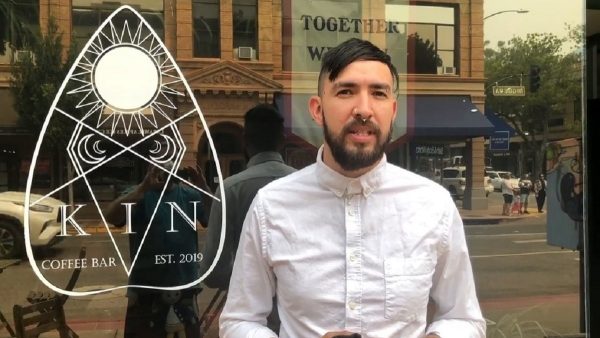 Amid allegations of sexual misconduct against an owner, Kin Coffee Bar in San Luis Obispo closed over the weekend to “reflect and reorganize,” according to a sign on the door. In addition, owner Julian Contreras is handing management of the company over to his girlfriend and the Kin Coffee Facebook page is disabled.

Last week, Ash Rianne accused Contreras and his friend Nate Abate of sexually assaulting her and an unnamed friend in Contreras’ bedroom in 2012, in several Instagram posts. Abate was arrested in 2012 on charges of statutory rape and digital penetration, in an unrelated case. He eventually pled to false imprisonment, according to court records.

Rianne’s shocking accusation quickly blew up across social media, with thousands of users liking and sharing the original post. In the following days, Rianne proceeded to post screenshots she claims to have received from anonymous accounts who reported having similar experiences with both Contreras and Abate.

A group of five local businesses responded by announcing the “Keep the change fundraiser,” in which your change will be used to provide legal support for the victims, according to Blackwater clothing boutique’s Instagram page.

“In wake of their bravery, we need your help to provide legal support for the 15+ women coming forward with their stories of sexual abuse from two local business owners in SLO County,” Blackwater posted on Instagram. “Please donate your change in support to get their justice they deserve.”

Contreras denied any affiliation between Kin Coffee and Abate in a lengthy Instagram post that says Kin Coffee “welcomes anyone regardless of gender, gender identity, sexual orientation, disability, age, religion (or lack thereof), or economic status.”

“Kin Coffee Bar has never had any affiliation with Nate Abate,” according to the Kin Coffee Instagram post. “We do not tolerate any sort of malicious behavior. I, myself, will take time to address these matters personally for the safety of the staff and the people involved. This statement is in no way trying to invalidate the feelings of any victims. You all are heard and there will be accountability.”

In his post, Contreras announces plans to donate $3,000 to RISE, a nonprofit that serves victims of sexual assault.

“This post from Kin is a vapid attempt at virtue signaling in the hope that people fall for the lies…because he uses buzz words,” Sidecar posted on Instagram. “He uses abusive, manipulative language in the hope that we, the normal, working people of the world, will pity him.”

Kin Coffee is currently closed, with a sign on the door: “The staff at Kin have decided to take this weekend to reflect and reorganize due to recent events. We’ll work our way towards a solution that honors, validates, and uplifts this community. Thank you for understanding.”