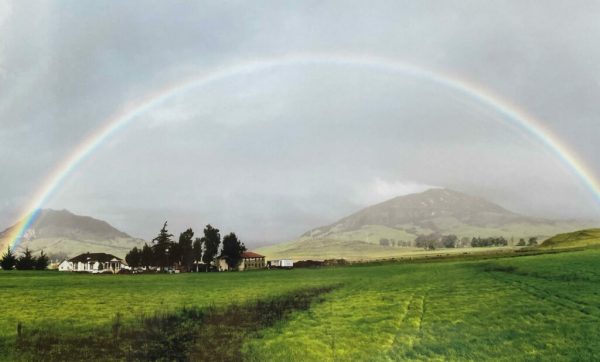 Located on DeVaul’s 72-acre ranch on the outskirts of San Luis Obispo, the Sunny Acres facility houses and provides sober-living services to several dozen low-income residents, many of whom could otherwise face homelessness. DeVaul and SLO County have repeatedly battled over code enforcement disputes pertaining to the property.

In the lawsuit, the county accuses DeVaul violating a permanent injunction against the property by allowing people to live in non-permitted structures, including sheds and RVs that are connected to non-permitted plumbing. Additionally, the county alleges DeVaul has increased the amount of outdoor storage at the site; made non-permitted improvements to the electricity, plumbing and sewage systems; and moved about 150,000 cubic yards of dirt within a flood hazard area without a permit.

Sunny Acres has a history of code enforcement violations dating back to 2001, according to the lawsuit.

Amid a previous spat between the county and DeVaul, a 2011 order from a local judge forced the rancher to evict effectively homeless individuals who were deemed to have been staying in non-code compliant structures. Sunny Acres later went into receivership, and then in 2013, DeVaul and the county entered into a stipulated agreement requiring the rancher to comply with various regulations in order to continue his operation.

In June, 2021, the county obtained a civil inspection warrant, and code enforcers went onto DeVaul’s property, accompanied by sheriff’s deputies. During the inspection, a county official said there were obvious violations on the property, including non-permitted tiny homes.

DeVaul also acknowledged the main residential building on the ranch was not property permitted because of a dispute over water. DeVaul had sought to connect the building to the city of SLO’s water system and was reportedly refused service.

In July 2021, the county issued a notice of violation.

Also last year, the county reportedly pushed for the sale of Sunny Acres to a Santa Margarita couple, a deal DeVaul rejected.

Since then, some progress has been made, but residents are still living in non-permitted structures; water does not meet safe drinking standards; non-permitted utilities remain in use; there is a substantial amount of accumulated junk; and there is no permanent solution to address the grading of the floodplain, the county’s lawsuit states.

The county is seeking a judicial order appointing a receiver to take full control of the property and make necessary repairs. Likewise, the county is asking a judge to find DeVaul and Sunny Acres in contempt of court for violating the permanent injunction.

DeVaul said on Wednesday that he has worked to clean up the property, including by removing more than three dozen vehicles and 200 tons of scrap metal. He has also tried to evict many of the residents, but they refused to leave, DeVaul said.