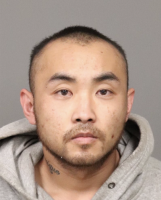 A San Luis Obispo man and possible serial catalytic converter thief has been charged in Los Angeles County over an incident that ended with his accomplices and him allegedly slamming into a patrol car.

The patrol vehicles stopped pursuing the suspects. However, the suspects’ van eventually came to a stop after running a red light and crashing into a Los Angeles County Sheriff’s Department cruiser, prosecutors say.

In May 2021, Xiong and an accomplice were allegedly caught stealing catalytic converters in San Luis Obispo. After residents on DeVaul Ranch Road reported hearing strange noises near their Honda Priuses, officers tracked down Xiong and Merced resident Gary Holley Lee, who allegedly had eight catalytic converters in their possession. At the time, Xiong was listed as a Merced resident.

Additionally, last month, Santa Barbara County Sheriff’s deputies arrested a suspect identified as Merced resident Xiong Due, 31, following a catalytic converter theft in Orcutt. It is unclear if the suspect arrested in Orcutt on March 23 is the same person as the individual in the San Luis Obispo and Santa Clarita cases.

“We are working collaboratively with law enforcement to prosecute catalytic converter thefts, however these cases are notoriously difficult to solve and prosecute,” Gascon said in the statement. “That’s why I am also working with state lawmakers on a legislative fix to prevent these crimes from occurring altogether by requiring that identification numbers be engraved on the catalytic converters themselves.”