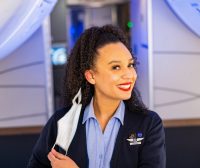 In the aftermath of a federal judge striking down the Biden Administration’s mask mandate for air travel and other public transport, major U.S. airlines have announced they will no longer require masks on domestic flights.

On Monday, District Judge Kathryn Kimball Mizelle ruled in U.S. District Court in Florida that the Centers for Disease Control and Prevention (CDC) exceeded its authority in adopting a regulation mandating masks nationwide at airports, train stations and other transportation hubs, as well as on airplanes, trains and buses. The CDC also failed to provide adequate justification for the mask mandate, Mizelle found.

Following Mizelle’s ruling, airlines, including United, American, Delta and Alaska, released statements saying they would no longer require their employees and customers to wear masks on domestic flights, but rather mask wearing would be optional.

“Masks are no longer required on domestic flights, select international flights (dependent upon the arrival country’s requirements) or at U.S. airports. More comfortable keeping yours on? Go right ahead,” United Airlines stated in a tweet.

Alaska Airlines noted in a statement that, though masks will now be optional on its flights, some individuals will remain banned from flying with the carrier because of their conduct related to the mask mandate when it was in effect.

“Throughout the last two years, we have relied on reporting from agents and flight attendants to ban noncompliant guests from traveling while the federal mask policy remained in effect,” Alaska Airlines said in the statement. “Based on our reports, we will have some guests whose behavior was particularly egregious who will remain banned, even after the mask policy is rescinded.”

Amtrak similarly announced it will no longer require masks onboard trains and in stations, but it still encourages mask wearing.

“While Amtrak passengers and employees are no longer required to wear masks while onboard trains or in stations, masks are welcome and remain an important preventative measure against COVID-19,” Amtrak stated in a tweet. “Anyone needing or choosing to wear one is encouraged to do so.”