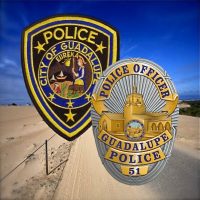 Following an hours-long standoff Thursday morning, authorities arrested a Guadalupe man who allegedly fired shots inside a home during a family dispute. [KCOY]

On Wednesday night, Guadalupe police officers twice came out to a house to conduct welfare checks. In both instances, there was just a family issue at the household, Guadalupe Police Chief Michael Cash said.

At about 12:30 a.m. on Thursday, police responded to the house for a third time. As officers were arriving, they heard gunshots coming from the house.

Officers established communication with individuals inside the home and determined a man had a gun that he had been firing. Guadalupe police then requested assistance from the Santa Barbara County Sheriff’s SWAT team and the Santa Maria Police Department.

Police helped a woman, as well as the father of the suspect, escape the house through a window.

The suspect barricaded himself inside the home and refused to come out. He also tried to lure officers inside the house.

At about 7:30 a.m., the man finally exited the home. Officers arrested him and booked him in the Santa Barbara County Jail.