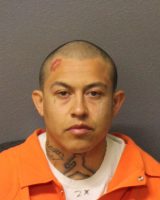 Santa Maria police officers caught a man who allegedly shot at a father and son who were inside a vehicle stopped at an intersection in the northern Santa Barbara County city Monday afternoon.

Officers arrived at the scene of what police described as a “horrible crash” and contacted two female occupants of the suspect’s vehicle. Police eventually arrested the two females for various misdemeanor charges.

The gunman, later identified as Junior Freddy Martinez, fled by foot into a residential neighborhood. Officers began searching the area with assistance from a Santa Barbara County Sheriff’s helicopter.

After a few hours, residents noticed a suspicious individual in their backyards and called for assistance. Officers located Martinez and took him into custody without further incident.

Investigators recovered the firearm Martinez is believed to have used in the shooting. Officers arrested Martinez and booked him in Santa Barbara County North Jail for attempted murder, weapons violations and charges related to his probation status.

Santa Maria police thank community members for helping them search for Martinez. Several residents provided police with video footage of Martinez as he was fleeing.

Anyone who has additional information or videos of Monday’s incident is asked to contact Detective Sergeant Todd Logan at (805) 928-3781 ext. 2532.