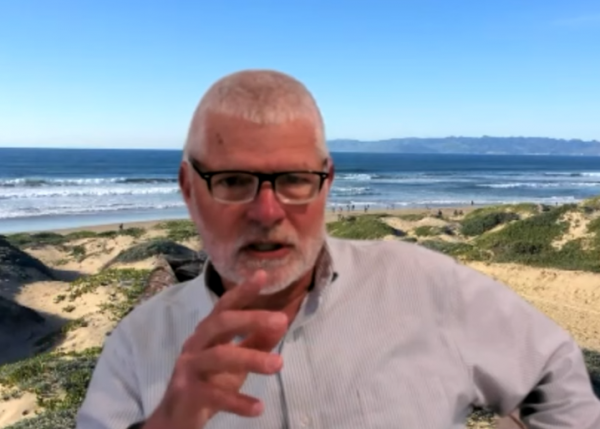 San Luis Obispo County Supervisor Bruce Gibson has signaled that he will attack anyone who questions the 2020 general election, the 2021 governmental recall election or the management of the election.

Private citizen Richard Patten, the author of the redistricting plan that was ultimately selected, raised a question on statistical processing anomalies in the vote count for the 2021 governmental recall election. Patten has been conducting a statistical analysis of the votes in terms of their processing (or lack thereof) with respect to the electro-mechanical capacity of the voting system and/or the readers through which the ballots are fed. He pointed out the following:

1. Apparently the ballot scanners are capable of reading a maximum of 200 ballots per minute. It was not clear from the presentation how many ballots the Dominion software can count per minute.

2. During different periods of the count, Patten asserts that the record shows that at some points groups ranging from 400 ballots to 6,000 ballots, and on to 11,000 ballots were each read in one minute, far beyond the capacity of the electro-mechanical scanners.

3. Supervisor Debbie Arnold questioned the current interim Clerk Recorder, Elaina Cano on what she knows about this. She stated on the record that at the time of the Nov. 2020 election, she was still an employee of the Santa Barbara County Clerk Recorder’s office and thus she would not respond. No one seemed to remember that she was the head election deputy in that office and that Santa Barbara County also operates the Dominion voting system. She should be intimately knowledgeable about its capacities.

4. Cano had another manager from her office, which was prepositioned at the other podium, attempt to answer the question. This individual stated that the “anomaly” was due to the fact that when spoiled, bent, or double marked ballots are discovered; they are pulled from the work flow for inspection with the hope that they can be repaired for counting in the system. She then seemed to infer that these are then hand counted, and some sort of summary is fed into the system as one document, thus accounting for more than 200 votes being tabulated in six minute in these instances.

5. No one on the board seemed to comprehend that it would be impossible for batches of ballots containing 400 to 11,000 errors to actually occur and then be sent to a hand count. No one questioned the facts or the logic. Can any independent count observer verify that 11,000 ballots were hand counted and then the total fed into the system as a batch? Is such a process even possible? The matter was dropped for the moment.

6. The fact that Cano and the other manager were in the room suggests that they or the board or both had a warning or premonition or some other way of knowing in advance of Patten’s question.

Notwithstanding that the matter was dropped, at least for the day, Gibson lit into Supervisor Arnold, stating that anyone who is questioning the election is guilty of “baseless insinuations.” He further ranted that such questions are “an affront to the Elections Division.” He went on to state that “there is no basis to conclude that there are problems with the election or vote count.” He even asserted that the questions evince a “classical smear campaign.”

Accordingly, Patten is accused in public by a member of the board, during a meeting, of “making baseless insinuations.” Any other citizen who has had questions about the Dominion system or other aspects of the election is guilty by implication.

The board should not allow a member to berate his colleague and the public for presenting data and asking questions.

Elected public bodies and officials may not forbid or interfere with speech with which they disagree during public comment. In this case, Gibson has signaled that he will attack anyone who questions the 2020 election or the management of the Elections Office.

This is clearly a speech chilling threat violation intended to silence Patten and Supervisor Arnold, while intimidating the public from asking questions or making further comment on the matter.

1. Censor Supervisor Gibson and warn him not to engage in such behavior that exposes the county to liability.

2. Schedule a board item and hearing to demand an explicit accounting on whether the system did count large numbers of ballots in excess of its 200 per minute capacity. The board should verify how there could be 11,000 ballots that had mistakes, and if they were counted and how the results were batch fed.

3. If there are gaps or evident problems, the board should quickly hire appropriate consultants to conduct a thorough forensic investigation of the 2020 election procedures and count.

The District Attorney should investigate these allegations.

Mike Brown is the Government Affairs Director of the Coalition of Labor, Agriculture, and Business (COLAB) of San Luis Obispo County. He is a former 45-year career city manager and county executive officer who served in some of the nation’s most progressive jurisdictions.