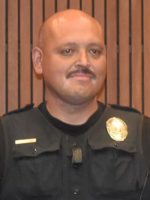 Mauricio Calderon, a 48-year-old Orcutt resident, turned himself in at his attorney’s office in Santa Maria on April 21. Deputies booked Calderon in the North County jail. Calderon posted a $50,000 bond that night and was released from custody.

Michael Scott, Calderon’s attorney, said his client cooperated with detectives and denied he committed any criminal conduct. Calderon gave a statement to detectives in which he provided a detailed explanation of the incident that occurred, Scott said.

A court hearing for Calderon’s case has been set for June 22. However, the Santa Barbara County District Attorney’s Office has yet to decide wither it will file charges against Calderon.

The Lompoc Police Department has placed Calderon on administrative leave. Calderon has been a member of the Lompoc force for more than 12 years.

Last year, Calderon was involved in two fatal shootings. In the first incident, Calderon, along with another officer, shot and killed a man who charged at Calderon with a knife. In the second incident, a man pointed a gun at Calderon and a pair of other officers, who opened fire, killing the suspect.