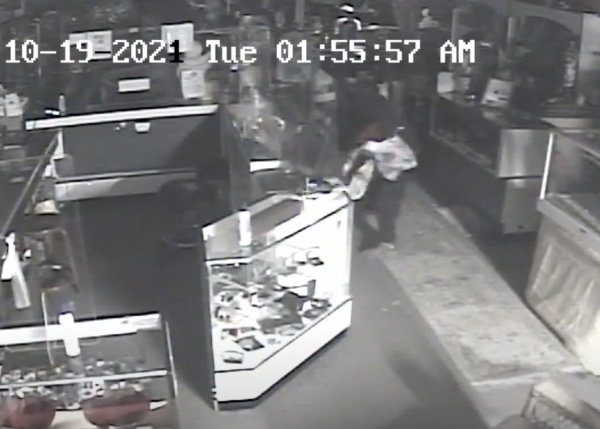 On Oct. 19, at about 3:45 a.m., an alarm went off at Rich Man Poor Man, located at 2110 Main Street. SLO County Sheriff’s deputies arrived at the scene and found the front glass door to the business shattered.

Surveillance video showed a male suspect smashing jewelry cases with a hammer. Investigators later found the hammer at the antique shop and collected it as evidence, according to the SLO County Sheriff’s Office.

The male suspect could be seen in the surveillance footage taking a large amount of jewelry from the smashed cases.

Based on the evidence collected, detectives identified James Matthew McPherson, 46, and Kristin Marie Miler, 39, as the burglary suspects. Both McPherson and Miller are described as transients from Santa Clara County.

Detectives discovered at least nine jewelry stores and pawn shops in the San Francisco, San Jose and Santa Clara ares where McPherson and Miller had sold the stolen jewelry.

Authorities transferred McPherson and Miller to San Luis Obispo County Jail, where they were booked on charges of commercial burglary, receiving stolen property, conspiracy to commit burglary and other theft-related offenses. Both McPherson and Miller currently remain in custody with bail for each of them set at $250,000.