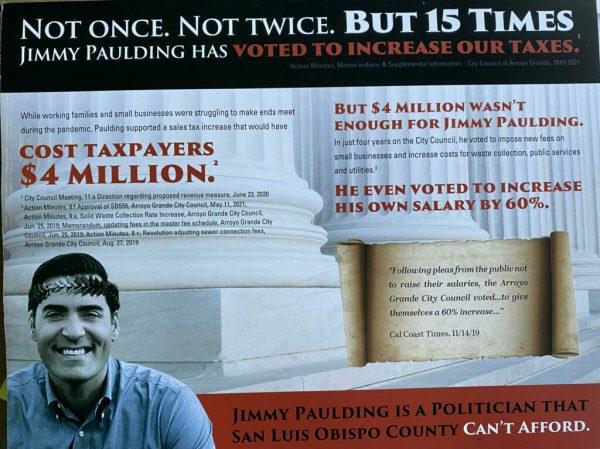 With the election fast approaching, Paulding accused Compton and developer Nick Tompkins of funding Back the Badge, a political action committee, and disseminating false information about his voting record, in a video message he released Thursday. Paulding asks voters not to believe a flier that says he voted as a city council member to increase his salary.

“So, you may have received some of these attack ads, they contain all kinds of false information,” Paulding says on Facebook. “For example, one of um says as a city council member I voted to increase my salary, when I voted against that twice.”

On Dec. 10, 2019, Paulding voted to increase his pay as a council member by 60%, from $405 a month to $648 a month, after voting against the raise a month earlier. Paulding also voted to change the timing of his next council race, which will allow him to run for the city council if he loses his bid for supervisor.

In his Facebook post, Paulding also accuses Compton of funding Back the Badge, which would violate campaign rules.

“That is absolutely ridiculous,” Compton said. “I have nothing to do with Back the Badge.”