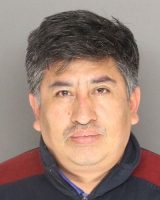 A man who allegedly operated an unlicensed massage parlor in Santa Barbara is accused of committing multiple sexual assaults at his facility.

Bernardo Rojas Ruiz, 43, allegedly ran a massage therapy business at a party supplies and gifts store located at 1426 San Andres Street. Rojas Ruiz sexually assaulted people at the unlicensed massaged parlor on June 6, 2021 and on Oct. 31, 2021, according to the Santa Barbara Police Department.

Authorities arrested Rojas Ruiz and charged him with two counts of felony unlawful sexual penetration and one count of misdemeanor sexual battery. He is currently being held in Santa Barbara County Jail.

Santa Barbara police, along with the Santa Barbara County District Attorney’s Office, are asking for members of the public to help identify additional victims or witnesses with knowledge of Rojas Ruiz’s criminal sexual acts. Anyone who is a victim of Rojas Ruiz’s criminal conduct or has information about his massage therapy business is asked to contact District Attorney’s Investigator Judi Hall at (805) 568-2360.