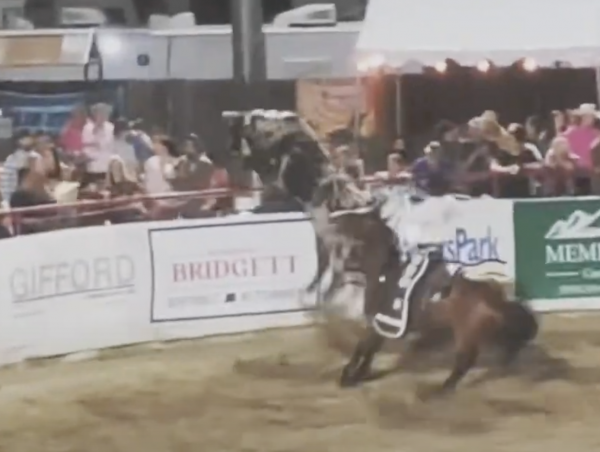 A bull leaped over a fence and into a crowd of people at a rodeo in the Northern California city of Redding Friday night, resulting in several injuries.

During the final section of the bull riding event at the Redding Rodeo, a rider fell off the bull, after which the animal runs toward the arena fence and leaps over it.

After jumping the fence, the bull ran toward the contestant parking lot, according to a statement released by the Redding Rodeo. The rodeo announcer immediately activated the emergency response plan, and livestock professionals responded and managed to safely contain the bull. They secured the bull near a bridge and immediately placed it in a trailer.

“We wish the best to all those affected. The safety of our fans in our highest priority and we appreciate their support,” the Redding Rodeo said in a statement.

Redding police told the Record Searchlight that the bull injured about six people, some of whom were bystanders in the rodeo stands, while others were by the bridge where the bull was captured. All of the individuals sustained minor injuries. However, a woman injured at the bridge was taken to the hospital in an ambulances, police said.

A 15-year-old high school student also said he went to the emergency room and underwent tests on his leg after he was injured by the bull when it jumped out of the rodeo arena. The teen’s leg was wrapped in bandages from his knee to his thigh. He said he was fortunate to not have suffered worse injuries.

Despite the incident, the rodeo issued a statement on Sunday saying, “Our 74th Redding Rodeo was a success.”

“We cannot thank our fans, sponsors, contestants, vendors, contractors and the hundreds of volunteers it takes to put on this rodeo. We are also grateful there were no serious injuries Friday night,” the statement continued.