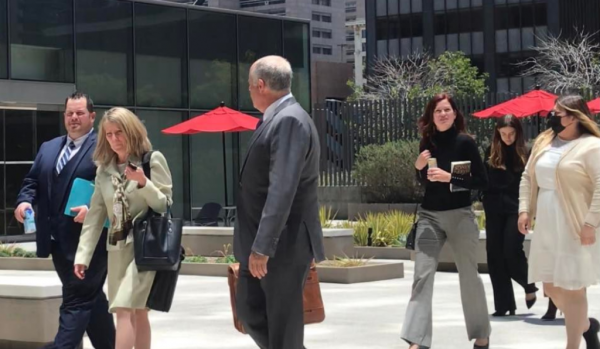 Helios Dayspring, his two attorneys, his sister, his mother and his girlfriend Valnette Garcia walking towards the courthouse

The sentence was five months less than prosecutors requested. While Dayspring asked for no time behind bars, Judge Birotte sentenced Dayspring to 22 months on the count of bribery and 22 months for tax fraud to be served concurrently.

Dayspring, 35, was ordered to surrender himself to federal authorities on or before Aug. 26. His attorney requested Dayspring spend his incarceration at the Federal Correctional Institution in Lompoc.

Wearing a blue three-piece suit, Dayspring showed no emotion while Judge Birotte read the sentence. Dayspring’s demeanor changed as he left the courtroom, and just outside, he stared upward with a look of anger, frustration and sadness on his face.

Dayspring’s attorney Sandra Brown Boodner argued that the defendant was a hard-working man who gave back to the community. Brown Boodner said that Dayspring had donated toys for children and turkeys to the poor. She argued that aside from tax fraud and bribery, Dayspring did nothing illegal.

However, Assistant U.S. Attorney Thomas Rybarczyk questioned the claim that besides the two counts against him, Dayspring did nothing illegal.

“He cheated on his taxes for more than four years, which he spent on his business,” Rybarczyk. “Defendant was a cold, calculating businessman who sought to bribe and cheat his way to a cannabis empire.”

Judge Birotte reminded Brown Boodner about Dayspring’s attitude that, “It’s a Monopoly game. I’m going to take out the competition.”

“What he did strikes at the very core of our government,” Judge Birotte responded. “No matter what you say, it is all white noise to people who say San Luis Obispo County is corrupt.”

Brown Boodner argued that Dayspring, an unsophisticated man, followed Hill’s direction in hiring a consultant and an attorney who led him down the illegal path.

Even though Dayspring admitted to attempting to bribe former Grover Beach Mayor John Shoals, Dayspring did not provide enough evidence to incriminate Shoals, Rybarczyk said. Much of the alleged information Dayspring provided prosecutors did not help the federal government with their investigation, he added.

“He had his hands in the political cookie jar,” Rybarczyk said. “He wanted to be the cannabis king,”