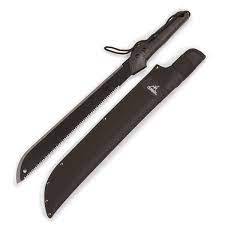 Santa Maria police officers arrested a man who allegedly attacked another man with a machete during a fight Saturday afternoon.

At about 1 p.m., 911 callers reported a fight in the 300 block of E. Monroe Street. Officers arrived at the scene and found a 24-year-old man who had sustained multiple lacerations from a machete, according to the Santa Maria Police Department.

Emergency personnel transported the man in an ambulance to Marian Regional Medical Center. A helicopter then airlifted him to Cottage Hospital.

Officers found evidence of the crime and detained multiple people leaving the scene. Detectives, along with crime lab personnel, also came out to the scene to investigate.

Following numerous interviews with witnesses, investigators identified the attacker as Jesus Espinoza Irazqui, 24, of Santa Maria. Officers arrested Irazqui for attempted murder and booked him in Santa Barbara County Jail with his bail set at $2 million.

Detectives are continuing to investigate the incident. They are asking anyone with information about the case to contact detectives at (805) 928-3781 ext. 2277.