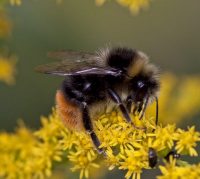 Bees can be classified as fish in accordance with California law, a state appellate court ruled on Tuesday.

The California Endangered Species Act (CESA) does not include insects as a type of endangered species. However, the California Fish and Game Code lists invertebrate as a subset of fish, and fish can be protected under CESA.

In attempt to ensure protections for four bumblebee species, the California Fish and Game Commission designated those bees as candidate species, doing so by listing them as types of fish, under the invertebrate subset. State almond growers then challenged the classification of a bee as a fish in a lawsuit.

Sacramento County Judge James Arguelles ruled in favor of the almond growers, finding that Fish and Game could not classify bees as fish. Then on Tuesday, the California Court of Appeal’s Third Appellate District reversed Arguelles’s decision, ruling that a “liberal interpretation” of CESA is justified.

The appellate court’s ruling states the Fish and Game Commission has the authority to list an invertebrate as an endangered or threatened species.

“We next consider whether the Commission’s authority is limited to listing only aquatic invertebrates. We conclude the answer is, “no,” the ruling continues. “Although the term fish is colloquially and commonly understood to refer to aquatic species, the term of art employed by the Legislature in the definition of fish in (section 45 of Fish and Game Code) is not so limited. We acknowledge the scope of the definition is ambiguous but also recognize we are not interpreting the definition on a blank slate. The legislative history supports the liberal interpretation of (CESA) that the Commission may list any invertebrate as an endangered or threatened species.”