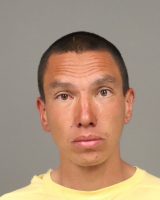 A woman jumped into a passing car to get away from a homeless man who attempted to grab her in downtown SLO Tuesday morning, after which the suspect fought with a concerned citizen and assaulted officers, according to the San Luis Obispo Police Department.

William Francis was observed being aggressive toward the woman at about 9:30 a.m. Francis attempted to grab her in a crosswalk,police said.

A concerned citizen intervened, which enabled the woman to get away by jumping into the car of a passing driver, who was also concerned about her safety.

The individual who intervened followed Francis until he became physically aggressive toward people in Mission Plaza. The concerned citizen then intervened again and fought with Francis to prevent another assault, police say.

Police officers arrived and took Francis into custody. Francis assaulted officers, but did not injure them, as they were arresting him.

Officers arrested Francis for attempted kidnapping, assault on an officer and public intoxication and booked him in SLO County Jail. Authorities sought a bail enhancement, which was granted. Francis currently remains in custody with his bail set at $500,000.

An investigation into the incident is ongoing. Anyone who witnessed it or other incidents involving Francis is asked to contact SLOPD at (805) 594-8029.