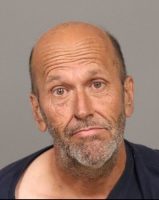 San Luis Obispo police officers arrested a serial arsonist for allegedly starting the fire that burned a homeless camp behind the Elks Lodge on Monday.

During late afternoon, officers on patrol saw smoke coming from the creek behind the Elks Lodge. San Luis Obispo firefighters arrived, quickly contained the blaze to 20 square feet and kept it from spreading to nearby motorhomes and trailers.

Police officers located Bradley Parrish close to the scene. Parrish, 52, is on parole and probation for multiple arson convictions, according to the SLO Police Department.

Officers arrested Parrish on several felony arson charges and booked him in the SLO County Jail. Parrish remains in custody with his bail set at more than $1 million.