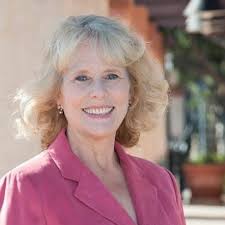 The book, “The Happiest Corruption: Sleaze, Lies, & Suicide in a California Beach Town,” details the threats and underhanded actions of former SLO County Supervisor Adam Hill and the pack of thieves, enforcers, and miscellaneous miscreants he attracted. Peterson describes Hill’s demands of her, and his full-throated threats of destruction if she did not comply.

“A must-read, firsthand account of trouble in paradise from a former mayor who spent years in the political trenches,” said Dave Congalton, KVEC radio host. “Peterson offers a much-needed primer for keeping local government open and accountable. Buy two copies. One for you and one for your local representative.”

Some highlights from Peterson’s expose:

Peterson resigned from the Grover Beach City Council in 2019 saying she could not participate in a council where cannabis permits could be purchased for $100,000, gaining her further wrath of Hill and his posse. In the months that followed, Peterson was involved in an accident she describes as a hit.

Tom Fulks, a consultant for supervisors Hill and Bruce Gibson, threatened Peterson through his SLO Sense Facebook page that he would be filming and following her if she attended a Coalition of Labor Business and Agriculture banquet, which he falsley alleged was related to the Ku Klux Klan. Fulks, Hill and Gibson worked together to demean and discredit those who questioned their actions.

At the event, a man dressed all in black with his face covered filmed Peterson walking through the parking lot.

After spotting Dan Carpenter, an opponent of Hill’s in the 2018 election, speaking to a developer, Hill told Carpenter he would take him out to the parking lot and beat him up if he spoke to one of his donors again.

Detailing the sleazy side, Peterson describes allegations of sexual misconduct against former Grover Beach Mayor John Shoals and how Hill and his closest affiliates engaged in sexual relationships with their assistants. These sexual exploits often led to taxpayer funded settlements.

Peterson also details the efforts of Hill and his co-conspirators to destroy a local news website, CalCoastNews, its founders, and its supporters.