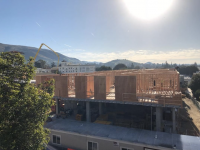 San Luis Obispo fairs among the worst cities in the country in the amount of personal space renters have in apartments. [Tribune]

RentCafe.com ranked cities nationwide by most and least apartment space per renter. San Luis Obispo’s population size was below the threshold for the rankings, so it did not appear on the list.