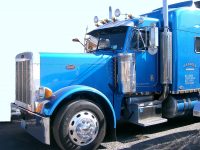 An estimated 70,000 truck owner-operators, representing much of California’s transport industry, are now in legal limbo due to the status of the state’s gig economy law, raising concerns over already stressed United States supply chains. [Bloomberg]

Signed into law in 2019, Assembly Bill 5 requires businesses to treat numerous workers as employees, not independent contractors. The California Trucking Association (CTA) has been challenging AB 5 in court. As a result of the legal challenge, a temporary injunction against enforcement of AB 5 on the trucking industry had been in place.

But on June 30, the United States Supreme Court opted to refuse to review the case. The injunction has since been lifted, and California truck owner-operators must comply with AB 5, though it is unclear how the state plans to enforce it.

The CTA estimates the law may force thousands of independent truckers off the road while they take steps to comply with the new regulations. More than 70 percent of truckers serving some of the United States’ largest ports, including Los Angeles, Long Beach and Oakland, are owner-operators. AB 5 will, in most cases, govern their relationships with carriers, brokers and shippers, according to the CTA.

“This would cause a ripple effect in the industry, pushing many drivers who don’t want to apply for their own authority to lease out of state, likely in Arizona or Nevada, and even force some into retirement due to increased market pressures,” McMaster said. “There will likely be pressure added on capacity in California that could exacerbate an already tough environment where drivers are at a premium.”

Eric Sauer, senior vice president for government affairs at the CTA, also warned about the potential worsening of supply chain issues, while saying the Supreme Court’s decision to turn down the case could not have come at a worse time.

“This denial couldn’t have come at a worse time,” Sauer said. “We’re in peak harvest season. We’re also in peak construction season. And this is the time for peak holiday imports coming into the ports.”

One Comment about “About 70,000 truckers now in legal-limbo over California gig economy law”