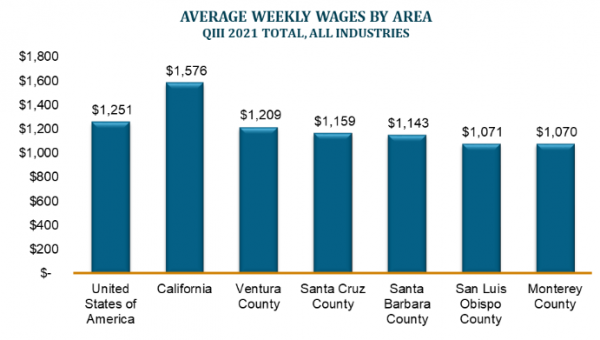 While boasting some of the lowest unemployment rates in the nation, both San Luis Obispo and Santa Barbara counties have average wages that fall well below the state and national averages.

Average weekly wages in the Central Coast are lower than in California overall and the United States. Industry wages in California, at $1,576 per week on average, were higher than the national weekly average of $1,251.

The differences can be partially attributed to the types of jobs available and wages in each county. Wages also vary between industries within counties.

“The differences between California and the Central Coast are at least partially attributable to the information sector’s greater share of employment and higher wages in the state overall, both industry and occupational,” according to the report. “This is especially visible in San Mateo, Santa Clara, and San Francisco counties, where average weekly information sector wages were $9,878, $7,694, and $5,740, respectively, and accounted for 8% to 13.7% percent of employment in all three counties.

“By comparison Santa Barbara County had the highest average information wage and share of total employment in the region at $2,035 and 1.9%.”

Both San Luis Obispo and Santa Barbara counties have thriving hospitality industries, which pay an average of approximately $715 a week.