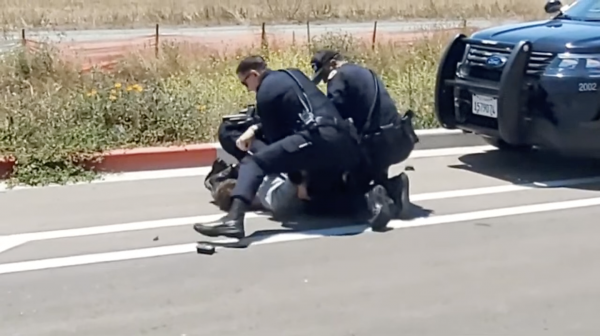 A video of an officer hitting a man repeatedly on the temple in San Luis Obispo during an arrest on Sunday has gone viral, leading to accusations of excessive force.

“SLO County Observer” live streamed and uploaded the video on YouTube, which now has over 8,700 views. While multiple commenters accuse the officer of brutality, others blame the suspect for resisting arrest.

Officers responding to a traffic hazard on Froom Ranch Road, pinned 29-year-old Justin O’Brien face down on the road. While three officers attempt to handcuff the suspect, he grabs hold of the handcuff with his free hand, according to the video.

An officer asks O’Brien to relax and explain he has warrants for his arrest.

“I am not Justin,” O’Brien repeatedly says.

A tall male officer warns the suspect he plans to punch him if he doesn’t let go of the handcuffs.

“I’m going to punch you in the face if you don’t let go of that handcuff right now,” the officer yelled, “It’s your last warning!”

The officer began punching and elbowing O’Brien in the temple, causing the suspect’s head to slam into the asphalt and bounce back up.

O’Brien stopped resisting, officers sat him on the curb with his hands cuffed behind his back while the officer who threw the punches appears to coddle his arm.

Officers booked O’Brien into the SLO County Jail on a felony charge of resisting arrest regarding the incident on Sunday. He is also being held on charges of being under the influence, petty theft, theft of personal property and resisting arrest, all misdemeanors. He is being held in lieu of $665,000 bail.