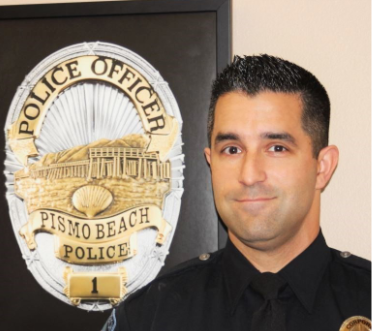 A Pismo Beach police sergeant resigned last month after an investigation revealed he engaged in sex acts with a local broadcast journalist while on duty, a relationship that allegedly went south after one of the parties, who were both married to others, wanted more.

The consensual relationship began shortly after Sgt. Adrian Souza pulled over KCBX reporter Angel Russell for a traffic violation in June 2020, according to a complaint Russell submitted to the Pismo Beach Police Department.

During the relationship, Souza and Russell would meet while the sergeant was on duty. They would meet at locations including Judkins Middle School and the Shell Beach tennis courts.

Souza also went over to Russell’s apartment several times while on duty, in uniform and driving a police vehicle. They engaged in sex acts during those instances, according to Russell’s complaint.

During the investigation, Souza admitted to having oral sex while on duty, documents show.

At the conclusion of the investigation, Smith notified Souza of his intent to fire him. Souza violated 13 city policies, including neglect of duty, willful misconduct, engaging in on-duty sexual activity and criminal, dishonest or disgraceful content.

Souza resigned on June 10, prior to his termination becoming effective. He is not facing any criminal charges.

On Thursday, the city of Pismo Beach released documents related to the investigation, as well as a statement on the matter.

“The City of Pismo Beach has made available redacted records pertaining to former Sergeant Souza, consistent with California law,” the statement said. “These records and related investigation materials indicate that the former officer engaged in inappropriate conduct while on duty with a consenting adult partner. When first alerted to this conduct, the city took action within hours and proceeded to conduct a lengthy and thorough investigation. The Sergeant is no longer a member of the Pismo Beach Police Department as he chose to resign prior to the conclusion of the disciplinary process.”