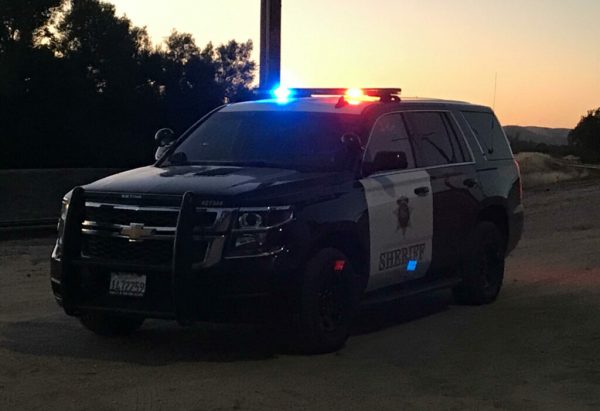 Police officers arrested one of two Atascadero burglary suspects Tuesday evening in the lead-up to an unsuccessful manhunt in Santa Margarita.

As previously reported by CalCoastNews, what began as a North County burglary morphed into numerous sheriff’s deputies and officers searching Santa Margarita and stationed at entrances and exits to the small community. The suspect who led officers on a chase into Santa Margarita evaded capture and remains on the loose.

On Thursday, the Atascadero Police Department disclosed details about Tuesday’s incident. The incident began shortly before 6:30 p..m. with a vehicle burglary in the 8600 block of El Camino Real, the police department stated in a news release.

An officer arrived at the scene of the burglary and determined a suspect broke the window of a female victim’s vehicle while she had left it unattended.

The victim quickly checked her bank activity and found someone had attempted to use her card in the 2200 block of El Camino Real. An additional officer arrived at the location of the business and spoke with an employee. The employee pointed to a female suspect leaving the store as the individual who used the stolen card.

A 37-year-old woman, later identified as Bakersfield resident Megan Nicole Hosman, attempted to flee the business and get into an awaiting Toyota pickup truck. Police took Hosman into custody as she tried to enter the pickup.

The driver of the Toyota truck fled southbound on El Camino Real at a high rate of speed. Atascadero officers driving patrol vehicles tried to catch up with the pickup as it entered northbound Highway 101. But, due to traffic in the area and the suspect’s reckless driving, the officers lost sight of the vehicle.

At about 7:05 p.m., an Atascadero officer was canvasing the southern part of the city when he observed the Toyota pickup on Viejo Camino. A San Luis Obispo County Sheriff’s vehicle was pursuing the Toyota.

The Atascadero officer followed the pursuit as the vehicles headed toward Santa Margarita. The officer lost sight of the suspect in the area of El Camino Real and Carmel Road.

Shortly afterwards, it was reported that a Toyota Tacoma crashed into a home in the 22400 block of H Street in Santa Margarita. Atascadero officers arrived at the scene and found the Toyota was the suspect’s vehicle, but it had not crashed into the home. The suspect had crashed near a home on H Street, knocking out power to 127 PG&E customers.

Deputies, sheriff’s K-9 units and CHP officers converged on the area to search for the suspect. They failed to locate the individual, whom police describe as a Hispanic man in his 20s.

Officers booked Hosman in San Luis Obispo County Jail on charges of false impersonation of another, burglary, false use of an access card and obstructing a police officer. Hosman is no longer listed as being in custody.

The incident remains under investigation. Officers are asking anyone who has information about the case to contact the Atascadero Police Department at (805) 461-5051.