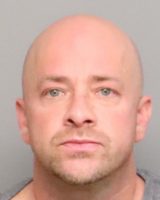 Police officers arrested an unarmed, would-be robber who fled without any money after allegedly demanding cash from Mechanics Bank in San Luis Obispo on Thursday.

Shortly before 4:40 p.m.,Tyler Kenneth Ferguson, 40, of SLO walked into Mechanics Bank at 2276 Broad Street and presented a note demanding money. Ferguson fled shortly after making the demand, according to the SLO Police Department.

Officers arrived at the scene and received a detailed description of the suspect from bank employees. Police then located Ferguson hiding in a nearby apartment complex.

After Ferguson was positively identified, officers arrested him and booked him in the SLO County Jail on a charge of felony attempted robbery. Ferguson remains in custody with his bail set at $30,000, according to the SLO County Sheriff’s Office website.

Police are still investigating the incident. Investigators are asking anyone who witnessed the incident or has information about the case to call (805) 781-7312.