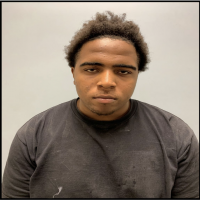 A commercial burglary in Paso Robles early Monday morning led to a chase on Highway 101, as well as a police search in the Salinas Riverbed and elsewhere, resulting in one crash and three arrests.

At about 3 a.m., a caller reported a burglary in process at the Tobacco Mart in Woodland Plaza. When officers arrived at the scene, they saw the burglary suspects getting into a white BMW, according to the Paso Robles Police Department.

The officers attempted to stop the vehicle, but the suspects fled southbound from Spring Street, entering northbound Highway 101, headed in the wrong direction.

A northbound driver swerved away from the BWM to avoid a head-on collision, before crashing because of the maneuver.

Officers followed the suspects southbound on Highway 101 until they exited at Ramada Drive. The suspects then headed toward Trailer Barn and drove into the Salinas Riverbed. The BMW got stuck in sand, and the occupants fled on foot. 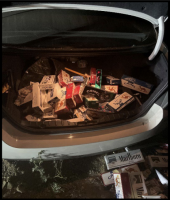 A Paso Robles officer deployed the department’s drone which located one of the suspects in the riverbed. Officers tracked down and arrested 19-year-old Demaura Grayson of Fontana, whom police determined was the driver of the vehicle and responsible for the burglary.

While continuing to search the area, a police sergeant spotted a vehicle traveling at a high rate of speed on Santa Ysabel Road near Santa Ysabel Ranch. Officers stopped the vehicle and determined the occupants inside had been involved in the burglary.

Officers arrested the driver, 26-year-old Brenden Clayton of Carson, and his passenger, 20-year-old Kayla Brigges of Compton. Police believe there are still two outstanding suspects from the burglary.