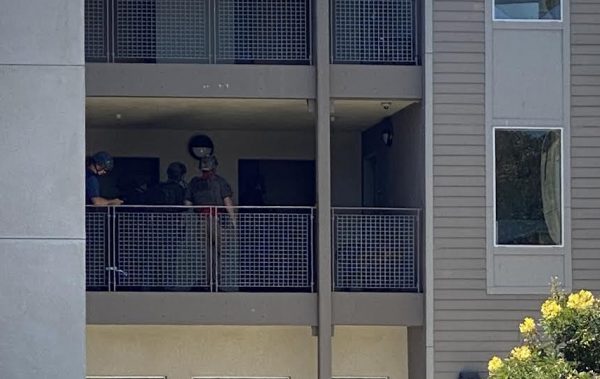 Following a three-hour standoff on Thursday, Santa Barbara County Sheriff’s deputies arrested a man with a knife who lunged at a person at an Isla Vista apartment complex.

Shortly after 11 a.m., 41-year-old Brandon Schaik attempted to stab the victim before retreating into his second-floor apartment at a complex in the 700 block of Camino Pescadero. The victim was not injured, according to the Santa Barbara County Sheriff’s Office.

Deputies arrived at the scene and ordered Schaik to exit his home, but he did not comply. At one point, Schaik screamed threats at the deputies while holding the knife in his hand.

UC Santa Barbara police officers, the Sheriff’s Special Enforcement Team, the Sheriff’s Crisis Negotiations Team and K-9 units came to the area to assist. Authorities asked residents in the immediate area of the standoff to temporarily evacuate or remain in their homes.

For more than three hours, deputies made repeated attempts to deescalate and convince Schaik to surrender. Eventually Schaik came out his front door and tried to walk away from deputies.

Schaik was transported to a hospital to receive treatment for injuries sustained while being caught by the K-9. Deputies arrested Schaik on charges including assault with a deadly weapon, assault on a peace officer, resisting an executive officer and criminal threats.