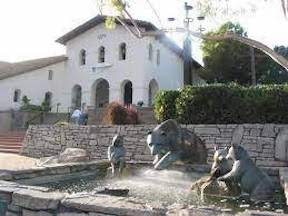 A driver crashed a car into Mission Plaza in San Luis Obispo early Tuesday morning, after which the vehicle burst into flames. [KSBY]

The male driver ran over a barrier pillar at the intersection of Chorro and Monterey streets at about 2 a.m. His black sedan struck a rock flowerbed, entered Mission Plaza and became engulfed in flames.

Firefighters arrived at the scene and extinguished the blaze within 20 minutes.

The driver suffered minor distress, firefighters said. It is unclear what caused him to drive into Mission Plaza.